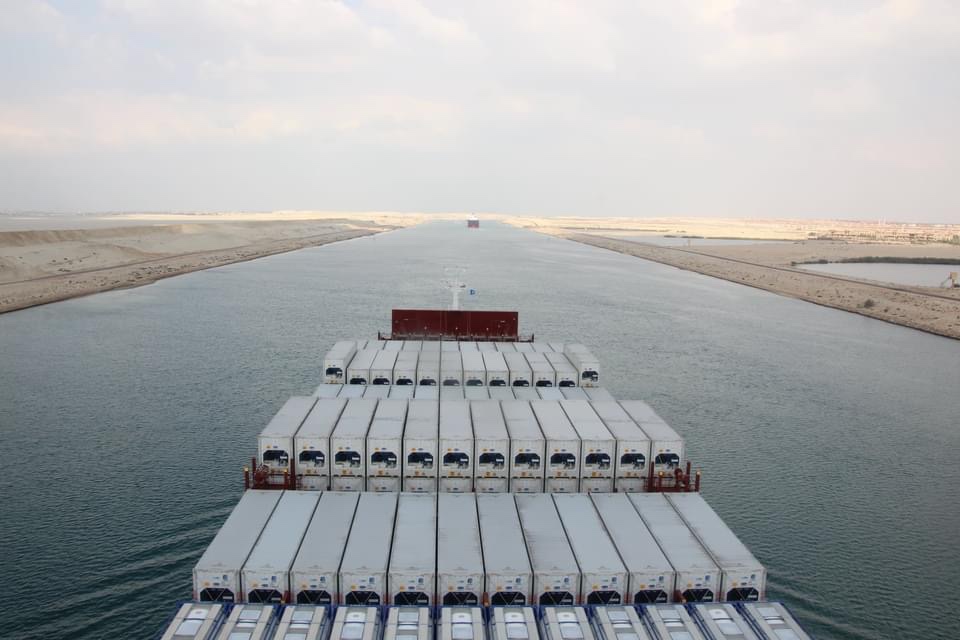 20201110 – The newest vessel in Eimskip fleet BRÚARFOSS (IMO 9822841) is finally in European waters after one year delay in delivery from her yard in Guangzhou in China. During the night she will pass the Gibraltar Strait with destination Rotterdam.

Due to engine failure prior to her first sea trial her delivery was delayed but she was build as the Wenchong H5645. Her building price is said to be $32,000,000

She was launched on 14th of December 2018 but her launcing name was ARCTIC REYKJAVIK but decission was to name her BRÚARFOSS. She would be the first of three sisters.

Actually she became the last of the sisters due to her engine problems but finally her delivery to Eimskip took place on October 9th. She departed Guangzhou on October 13th for Taicang of Shanghai where she loaded empty containers for her owner and as well for customers for unloading in Rotterdam.

After bunkering in Singapore she passed the Suez canal on November 6th heading for Rotterdam, Arhus (Denmark) and to the home of Eimskip Reykjavik she is expected to arrive on November 24th.

BRÚARFOSS is manned with 16 strong Icelandic crew under command of Captain Karl Gudmundsson. He has been serving in the Eimskip fleet since 1979 when he joined then company vessel SKEIÐSFOSS at the age of 15 as mess boy.

BRÚARFOSS is the sixth vessel in Eimskip fleet to bear that name but the first one was build and delivered to the company in 1927. Unfortunately the 2020 BRÚARFOSS is flying the flag of Faroe Isl. (FAS) but not the Icelandic flag as the first four former barer of the name.