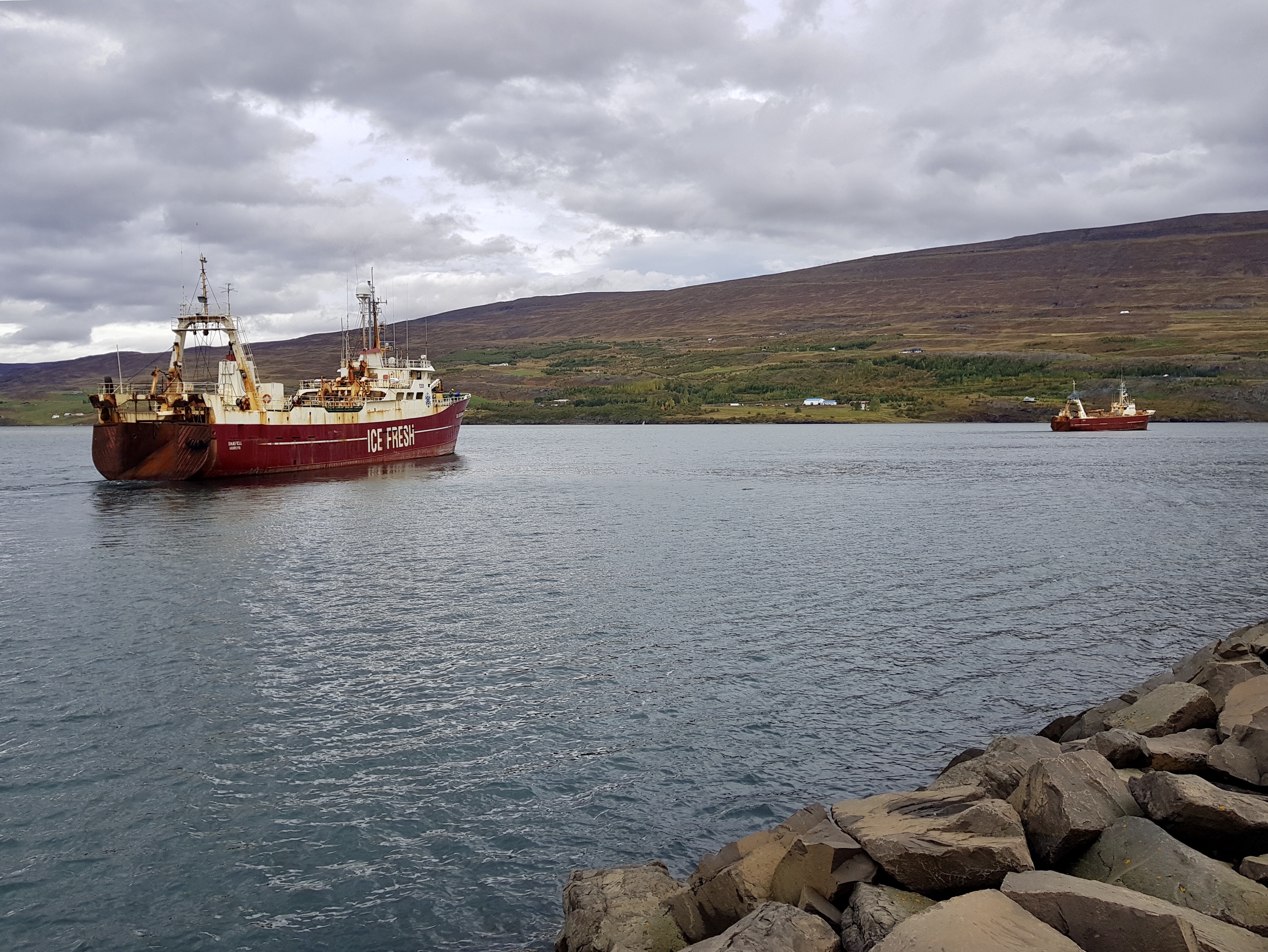 Two trawlers owned by Samherji hf. Iceland left their homeports Thursday September 20th heading for Ghent in Belgium as their final Port of Call. These were the trawlers HJALTEYRIN and SNÆFELL.

HJALTEYRIN was delivered in 1977 as BJÖRGÚLFUR for Útgerðarfélag Dalvíkur hf from Slippstöðin h/f in Akureyri but her hull was build by Flekkefjord Slipp & Maskinfabrik A/S in Norway. She was last of three sisters but she was the only one finished in Iceland. The others where GUÐBJÖRG and GYLLIR.

Her hull had been lying for some time in Akureyri before the yard finalized her. Útgerðarfélag Dalvíkur was later merged into Samherji but no changes where made of here name or PoR.

In 2017 she was renamed HJALTEYRIN due to newbuilding to be launched in Cemre Shipyard in Turkey that would take her name.

HJALTEYRIN arrived from her last fishing trip the day before. After taking her fishing gear off in Akureyri she was ready for her final voyage.

On her way from Akureyri she entered her Port of Registry Dalvík that is 20 nm from Akureyri for saying farewell to her home town.

SNÆFELL was build by Vard Søvikens Værft in Norway in 1968 one of three sisters build for Faroes trawler company. She was named STELLA KRISTINA but she was sold together with her sister STELLA KARINA to Iceland in September 1973.

In September 2002 she was sold to Samherji hf. also in Akureyri and renamed AKUREYRIN. On May 27th 2006 a fire broke out in her accommodation while she was fishing of the Western fjords of Iceland. Two crew members where killed in the fire but the crew managed to extinguish the fire. She managed to return under own power to port in Hafnarfjordur.

She was repaired and brought back into service but in March 2009 she was renamed SNÆFELL by her owners. She had been laid up in Akureyri for some time after Samherji started to get newbuildings replacing then present fleet. Her sister is still in service bearing her original name as STELLA KARINA.

As tradition when fishing vessels from Akureyri are leaving for fishing grounds relatives and others are saluting the vessels with their car horn and the vessels are replying with their typhoon’s.

There was no exception when these two well loved vessels left for their final voyages leaving lots of memories to the communities those vessels have served successfully for decades. On the pier was lots of people but not least former crew members and skippers that both where in command of them or had served in the fleet together with them.

Farewell and your memories and history will be well kept.