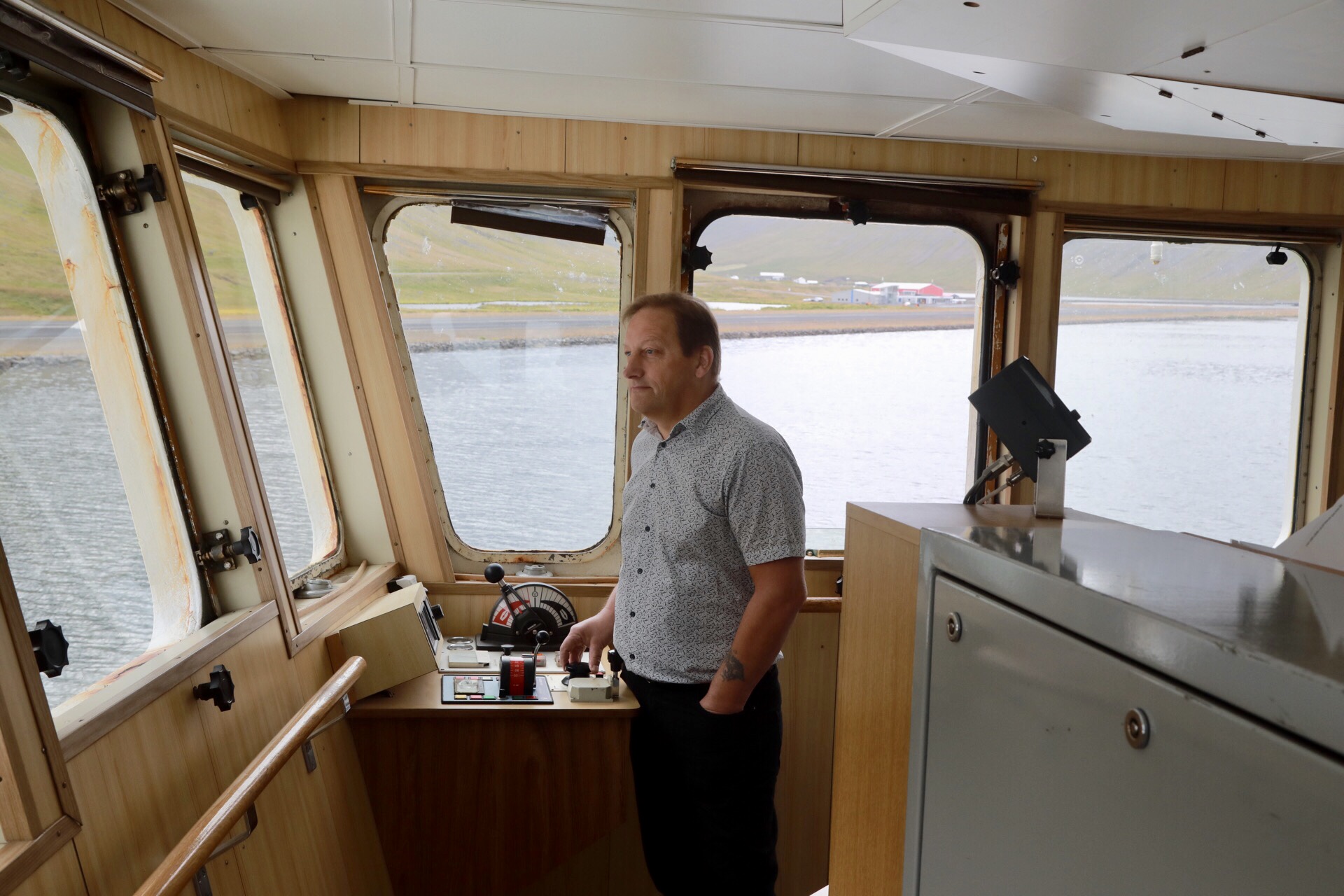 As Captain of the trawler Júlíus Geirmundsson in 2018 but she is named after my grandfather.

Born in Reykjavik Iceland in May 26th 1957 son of seafarers as my mother sailed during the WWII on Icelandic passengership and my father in the fishing fleeti from 1942 till 1954 when he joined the Merchant fleet till his retirement in 1992. First signed on a ship week before my 15th birthday on the coastal vessel Esja where my father was AB.

AB on the passenger vessel GULLFOSS in 1973

As trainee in the Icelandic Coast Guard serving on the coast guard vessel ÓÐINN in 1972 at the age of 15.

The next years I was different ships but longest on the tanker Kyndill (IMO 6820842) till I was accepted to the Navigation School in Reykjavik in 1975. During my time in the Navigation School I and my best friend and class mate Magnus Hardarson where AB’s on the US drilling vessel Glomar Challenger. We both gratuated in 1978. His latest ship was master of the container vessel LAGARFOSS (IMO 9641314) till retirement in August 2021.

Three Icelandic AB’s on the GLOMAR CHALLENGER in 1975. From left Magnus Hardarson (retired Captain of Lagarfoss), Kjartan Jarlsson, and I.

I sailed on different general cargo ships as second and chief officer but in 1979 I joined the Icelandic State Shipping. For four years I sailed as supercargo, second officer and chief officer on Norwegian pallet carriers chartered to the Icelandic State Shipping (Ríkisskip). Promoted to Captain in 1984 when the charter vessel was purchased to our company.

Second Officer on RO/RO vessel BIFRÖST in the North Atlantic on voyage from Hafnarfjörður (Ic) to Norfolk Virginia (US) in 1978.

In my Icelandic State Shipping uniform in 2013 with my present vessel SÆBJÖRG in the background.

In 1991 I took over as Dep. Manager and Pricipal of the Maritime Safety and Survival Training Centre in Reykjavík which is owned by Icelandic Association of Search and Rescue. I also took command as the Captain of the training vessel Sæbjörg. I have been involved in numerious committees on safety of seafareres and fishermen including present both in the board of the Maritime Council and the Icelandic Marine Accident Investigation Board (1995 to present day). Been advisor to the Icelandic Transport Authority to IMO meetings regarding training of seafarers (STW and HTW meetings). From 2004 to 2015 I was Chairman of the International Association of Safety and Survival Training

With my wife Áslaug (Kris) Hansen and wearing the Knights Cross.

In 1990 awarded on the Icelandic Maritime Day for good order of Safety on my vessel ASKJA (IMO 7407726) and in 2007 awarded by Sea Shore and Safety Services, Dublin, Ireland for my contribution to safety at sea Internationaly. In 2013 I was awarded the Knights Cross of the Order of Falcon by President of Iceland for my contribution to safety of Icelandic seafarers and fishermen. Appointed to Honourary Member of IASST in 2015.

I and my wife on the Icelandic Maritime day in 2014 with our grandchildren on the bridge wing of the training vessel SÆBJÖRG. I and my crew with spouces played pirates for that day.

In command of the SAR vessel VÖRÐUR II in October 2018 after training with the Icelandic Coast Guard in helecopter winching of our students at the MSSTC.

Standing by the trawler named after my grandfather which I had the opportunity to take command off for a few days in September 2018. A great thanks to her permanent captain for making my dream come through. I was born on my grandfathers 73rd birthday.

I have been a member of the World Ship Society since 1974, Klubb Maritim (Sweden) since 1987, Norsk Skipsfartshistorisk Selskap from 1990. I have been hobby photographer since at the age of 11 and have participated in few photo exibitions together with the Icelandic photo club Focus. My main topic is ships photographs a